When I first discovered Jean Plaidy, apart from being overwhelmed at the number of books she published, I noticed many had strange titles. To name a few: The Vow on the Heron, The Passage to Pontefract, Health Unto His Majesty, The Rose Without a Thorn, Epitaph for Three Women; some are not so strange, but have a special meaning pertaining to the main character in the book and are sometimes from a poem or an unofficial title. I’ve enjoyed finding out the meanings behind the titles. Here are a few examples:

Revolt of the Eaglets – Henry II had a painting of himself as an eagle and his four sons as eaglets. Three of the eaglets are attacking the eagle while the fourth eaglet is waiting, watching. Historically, his three older sons spent their lives battling against him and John, the youngest, waited in the shadows and just before Henry’s death he found his ‘loyal’ son had gone over to the other side as well.

Uneasy Lies the Head – The story of Henry VII, though ‘uneasy lies the head that wears a crown’ is from Shakespeare’s play, Henry IV, it still fits the story well. Henry Tudor may have won the crown on the battlefield, but he is plagued with potential usurpers who may have a better claim than himself. He spends his reign rebuilding a broken country and firmly planting his house of Tudor as the rulers of England.

In the Shadow of the Pomegranate – Katherine of Aragon, Queen of England and first wife of Henry VIII, was perpetually pregnant, but had trouble producing a full-term, healthy male child. It was customary for the queen to have an official symbol, and unfortunately for Katherine, hers was a pomegranate fruit – the symbol of fertility. This inability was ultimately her downfall, for if she had a son Henry never would have divorced her.

St. Thomas’s Eve – This is the story of Sir Thomas More, writer, humanitarian and unwilling Chancellor of England. He was beheaded on orders from Henry VIII on the eve of St. Thomas (Catholic Saint Day).

Here Lies Our Sovereign Lord – An outrageous poem of Rochester, daringly nailed to King Charles II’s bedchamber door (who thought it was quite witty, though banished him for a while anyway):
Here lies our Sovereign Lord,
the King whose word no man relies on:
He never said a foolish thing
nor ever did a wise one
Posted by Arleigh at 11:43 AM 5 comments:

review: Goddess of the Green Room 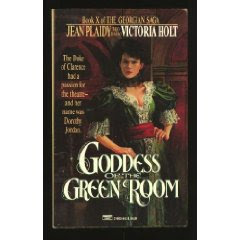 Dorothy Jordan, actress extraordinaire and royal mistress, was unlike most woman in her position: she was honest, loyal and completely selfless. She always used her pay to take care of her loved ones, and was devoted to one man at a time, even if he didn’t deserve her.

The daughter of an affluent, Irish actress, Dorothy was born for the stage. When her father left and her mother was too ill to work, she made the money the family needed to survive. So much they depend on her that she had to do things that were against her better judgment (and her values) to keep the bills paid. One of such was becoming the mistress of a selfish and vindictive theater manager.

She finally had enough of that scene and moved to England to try her luck, and became an instant hit. A few years acting in the provincial theaters and she received an offer from London: Richard Sheridan and Drury Lane! She became the most popular comedy actress and continued to be adored by the public throughout her acting career.

Perhaps the most notorious scandal Mrs. Jordan was involved in is her role as the Duke of Clarence’s mistress. They lived together for 20 years and had 10 children before he left her to pursue various young heiresses, as he was deep in debt and perhaps going through a mid-life crisis as well.

Dorothy is a very likable character, but she gives too much and it’s heartbreaking to see all of the bad things that happened to her. This is a great story and covers much on the actors and actresses of the time, as well as, the politics – especially between Pitt and Fox. Even so, I didn’t enjoy reading about Dorothy’s problems and I wish she had had something to hold on to at the end.

The Prince Regent is tolerable in this novel, which is a complete change from a Plaidy novel I read earlier this year, Indiscretions of the Queen (Caroline of Brunswick, Princess of Wales). It is strange that she could write a character with so many facets that he is likable in one scenario and detestable in another – and it still makes sense. Jean Plaidy was such a clever writer and her early studies in psychology really show in her novels.
Posted by Arleigh at 9:20 PM 5 comments:

In reading the Plantagenet Prelude, we come across more than just a passer-by incidental type of lady; this one happened to be a favourite mistress of Henry II, or so I beleive...

I was intrigued by this mistress who was most probably a total change of pace for Henry, when compared to Eleanore.  Wherever you read about her there’s this sense of Rosamund bringing peace, joy and love in a warm, gentle and feminine haven for the rambunctious king to be enveloped in; extremely the opposite, when compared to the very intense, passionate and sporadic Eleanore (hey, even a king needs his respite;)

Whatever opinion I may have concluded to, the fact remains that there is little more than legend attributed to this fair lady.  There are so many stories that make for interesting reading and this is especially true of the books written about Eleanore. The one that prevails is the one of a very jealous Eleanore poisoning Rosamund at the Woodstock lodge that Henry put her up in.  And, still in others, she was murdered, tortured, or even roasted by the evil Eleanore- ahh!

It’s believed that Henry met Rosamund around the time that Eleanore was pregnant to their last child. Henry apparently met her during one of his campaigns on one of his stop-overs.  She was a young maiden,  daughter of a lord (marcher) and had several siblings as well.  Henry was taken by her beauty and she was to become his lover until death- or almost.  Two years before passing, Rosamund took up the veil, putting an end to their ‘grand’ love affair- she died two years later.

And so, how many heirs did the affair produce? This too is all based on legend and hearsay.  It’s speculated that she may have bore Henry at least one child, but no records can even prove that.  The story that she gave birth to Geoffrey Plantagenet and William Longespee would both prove wrong as well; Geoffrey was apparently born before the couple ever met and William was born four years after Rosamund died.  Historians claim that the two sons were born by two other different mistresses- but that’s another story.

Rosamund Clifford, Henry’s great love, with no facts and no records to substantiate the stories…was she merely but a passing concubine of the times or is there more to her story?

Here is a beautiful painting of Eleanore and Rosamund 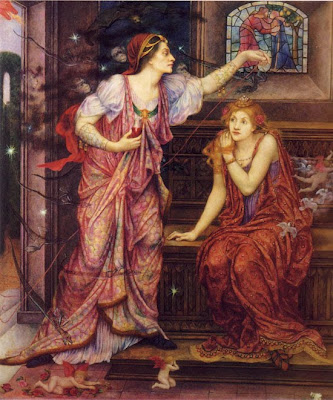 Here are the 2 last questions for our September read: The Wandering Prince (First volume of - The Love of Charles II).

3. Louis' love for Henriette is increasingly tainted by his jealousy over her relationship with her brother. At what point does his obsession turn threatening? Does Henriette recognize the shift? How does Anne of Austria's death affect Louis' attitude toward leadership and love?

4. Why does Henriette consent to a rigorous Catholic education, when she knows it is against the express wishes of her late father and most of her siblings?

Please let us know what you think:)

Reading Discussion- the Wandering Prince (The Loves of Charles II)

Hi everyone!  I’m happy to inform you that Arleigh is slowly settling back to some sort of normalcy in her life- Thank God she and her family are doing well and are nicely settled in a temporary new home. Arleigh we’re all glad you’re doing fine!

So then, on with the blogging as usual…

Since some of us did participate in our monthly reading of The Wandering Prince (embarrassed to say…not me..)- we do have some Discussion Questions pertaining to the read.  Please join along if you’ve read this book last month or ever before that. We'd love to hear your thoughts and opinions:)

1.      Henriette is introduced as a garrulous, opinionated, two-year-old political refugee masquerading as the son of a peasant.  That feisty personality does not reemerge until page 216, when Henriette exiles La Valliere in a vociferous fit of rage over the girl’s dalliance with Louis. In between these episodes, Henriette cuts a meek and tolerant figure, mild and forgiving even in the face of her husband’s flagrant indiscretions, her mother’s ruthless political ploys, and her lover’s repeated infidelities.  Is Henriette a wimp, or does she display control over her emotions? Either way, is, she likeable?

2.      The long suffering Henrietta Maria plays both the tragic figure and the villain throughout this novel. Do her constant harangues intensify-or offer comic relief from- the relentless tension of the story?  Do any of her wishes for her children come about?