Can you guess + giveaway!

The following sentences are the beginning of a Jean Plaidy book. If you can guess which one you will get: 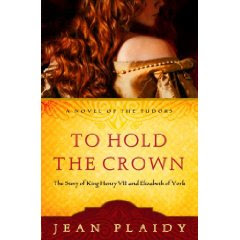 To Hold the Crown, previously published as Uneasy Lies the Head

Now, to the fun part... which Plaidy novel starts with:

'A King cannot have too many children, if they be bastards,' mused the King. 'It is only the legitimate ones with which he should be sparing. Too many legitimate sons can cause friction, as in my own family. But bastards can be thrown a castle or two, honours, titles and they may boast throughout their lives of their royal connection, and be loyal often, for a man will be loyal to that of which he is proud. But even so a King should have more than one legitimate son, for in what sad case he is if by evil fortune he should lose his heir.'

**Please, if you already have To Hold the Crown and do not need to be entered in the contest, do not guess and ruin it for the others :) Thank you!
Posted by Arleigh at 9:06 PM 25 comments:

Book Review: Myself My Enemy 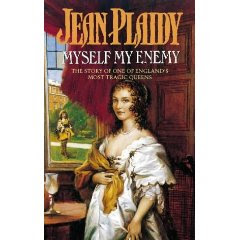 Myself My Enemy is a terrific account of Henriette-Marie’s life by my very favourite author, Jean Plaidy! This novel is told in the first person and so vividly described and filled with emotion that it definitely has become another of my preferred reads.

In Myself My Enemy, you inmmediately get the feeling of what this loyal- to her- king –lady is all about. Henriette-Marie was first and foremost, the great King Henri IV de Navarre’s last daughter. As a daughter of France by blood and by right, she is sent to marry Charles I of England. Wanted and chosen by Charles-The Queen of France relinquishes her daughter in the hopes of reuniting differences amongst not only the French and the English, but especially the religions (Protestant and Catholic).

From the very beginning we get to see that this fine Queen Consort of England is no push-over. She stands firm for her beliefs and choices when it comes to religion, friends, principles and ideas…unfortunately for her, this tenacity sometimes borders big time stubbornness. Such defiance is not always pleasing to the King; yet, he loves his Henriette dearly and although it would seem that they were opposites- in terms of sticking to their own point, they were actually quite similar.

Their relationship becomes one of give and take in where they both need it most. As time goes on, they develop a strong love and bond that will keep them faithful and caring deeply for eachother until the very end.

I really wanted to read this one in particular, especially becauseI'm way gaga over Charles II and so it was only right that I read Plaidy’s novel on his mother. I’m so glad I did! Reading Myself My Enemy gave me an inside look on Charles as a youngster seen through the eyes of his mother as well as his siblings and their situation amidst the terrible fate of Charles I. What I enjoyed mostly though was getting in closer on Henriette Marie’s last child, and Charles II’s favourite sibling- the absolutely delightful and charming young Henriette, or Minette, as her big brother called her. (see my post on her here).

The book is filled with a lot of the history and turmoil of the time period and makes no excuses for Charles I ‘s somewhat lacking traits for a King…The details are incredible and although I did get a very good sense of his leadership weakness, I did see the magnitudes of his strength in character when it came to love for his wife, family, and England (as he saw it), as well.

Henriette Marie loved her husband and did all she could to help him. After her escape to England (to save her pretty head), she and Minette lived in almost utter poverty without ever giving up hope. Her biggest wish was for Charles II and all her children to turn to the Catholic faith- and this she struggled towards achieving right up to the end. Minette, her favourite child would live her life taking on this role as crusader for the faith as well. Strange coincidence how both mother and daughter of the same name were both born by Kings who never got to see them into their childhood and on…

Excellent Book! I strongly recommend it.

Sidenote: Charles I was a one-woman-man. On this aspect, Charles II absolutely did not take from his dad. But if we can base ourselves on the positive way his dad treated and loved his strong-character mom, then it’s fair to say that it’s no wonder Charles the Rake was an absolute fine and understanding man when it came to treating the ladies; making him an absolute gentleman.
Posted by Lucy at 7:49 AM 10 comments:

I've stumbled across an auction site that has some Jean Plaidy items for bid and thought I'd share. My husband recently bid for an autographed photo like the one below (though I have not yet received it). 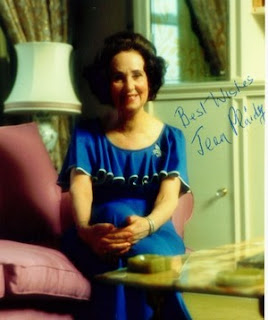 A note card thanking the recipient for birthday wishes: 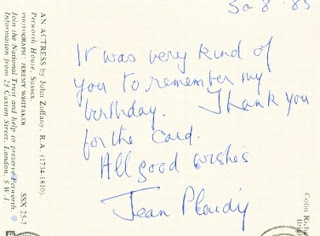 A typed letter with signature: 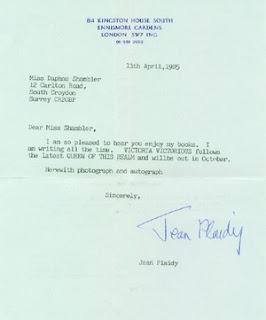 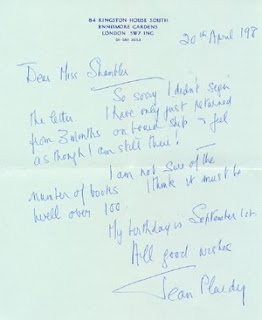 And on eBay I found a SIGNED 1959 copy of The Road to Compiegne for $142 am was set to buy it (after begging the hubby) and when I went back they had upped the Buy It Now cost to $489! I was very upset, but then the hubby told me I can buy the remaining Arrow reprints I needed for my collection (a total of $190) for my Christmas present. So, either way, it's a Plaidy Christmas for this fan! I now have 81 of 94 single Plaidy novels!
Posted by Arleigh at 10:55 AM 10 comments:

review: The Shadow of the Pomegranate 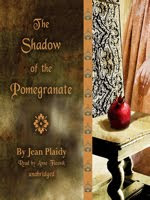 The Shadow of the Pomegranate

This is my first Jean Plaidy audiobook and the fact that I had already read the book (more than 3 years ago) did not diminish my enjoyment of the story. I’ve been reminded why Plaidy’s version of the Tudors is my favorite, and for the same reason I like all of her books: they mix political intrigue perfectly with the character’s personalities and offer excellent explanations as to the thoughts and actions of those characters.

The Shadow of the Pomegranate is the middle book in the Katharine of Aragon trilogy, the first being Katharine the Virgin Widow and the last The King’s Secret Matter. Though it is in a trilogy it reads as a stand-alone, beginning shortly after the marriage of Henry VIII and Katharine of Aragon. The foundation of Katharine’s relationship with Henry is laid, while she watches him slowly change from petulant boy to tyrannical man. She holds her place firmly in his affection until the perfidy of her father – using Henry to pay for his wars, while promising him conquest for England – and, of course, her many failures at producing the male heir Henry so greatly desires.

This novel covers the European powers of the time, from the Emperor Maximilian, Ferdinand of Spain and Louis XII of France to Charles V and Francois I of France. Henry’s disastrous early campaigns to gain territory in France and Katharine’s great defeat of the Scots are expanded upon, but there is also much intriguing in the court between courtiers , statesmen (like Cardinal Wosley) and the foreign ambassadors trying to rise in favor and in the process degrade one another. I really enjoy a book that can tie all of these together to make an intriguing story.

As usual there are mini-stories happening in the background to explain the actions of the main characters. A relationship between a peasant woman and one of the King of Navarre’s secretaries claims a chapter of the book in order to explain how his schemes were found out by Ferdinand and thus a war was started which robbed Henry of his desired campaigning on the continent. I marvel at small details like this because it is the product of such immaculate research.

As for the format, I really enjoyed listening to this book being read on my commute to and from work. Anne Flasnik is an excellent narrator and I plan to buy more Jean Plaidy audiobooks read by her. She can flawlessly execute a different voice for each character – so feminine for the ladies and a deeper tone for the men. She also has a gift with pronunciation and foreign accents.

I have nothing but praise for this book and hope to own more Plaidy on audio soon!
Posted by Arleigh at 6:28 PM 4 comments: