This deliciously French historical on Louis XV, the Well- beloved (le bien aimé) just led me to further embrace my passion for reading Plaidy. Simply put: History at its best. Yes, I did say history, because no matter that Plaidy’s novels classify as HF, you just need to read one to immediately understand that this is an accurate version of the past retold in its best form. 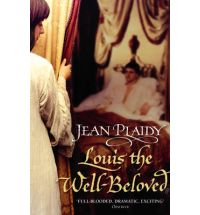 Louis The Well Beloved, Jean Plaidy
The story begins with the Sun King, Louis XIV (Louis XV’s great grandfather) on his death bed, his life imminently ending. From the moment the Sun King holds his little great grandson and tells him that he will be his successor, I fell in love with the little guy who would become the Well beloved of all of France.
If it weren’t for his great grandfather and uncles, Little Louis was left practically an orphan after the sudden deaths of both his parents and older brother. The only one left to mother him was his governess, whom he became completely and totally attached to (in my opinion, this in itself probably set the stage for loving in a grand way, all the subsequent ladies in his life).

It was incredibly interesting to read about Louis’ coming of age as a Little King admired by all. From the beginning we sense his kind nature and desire for closeness and intimacy (with the privileged few, mind you). Even more important, Louis stands out as one whose great aversion to any type of conflict or breach of etiquette was mega- or borderline insane.

Louis The Well Beloved takes us through Louis ’life, his reign and his loves...and of these, there were quite a few. Louis, in his all consuming passion for the ladies, was, believe it or not, incredibly faithful (especially for those times...and in France!). Without going into too much detail, I will mention the obvious Mistress, Madame de Pompadour; notorious for winning the King’s heart (she wasn’t the first nor the last though...). I love the way Plaidy portrays her in this novel. It’s a refreshing look at someone whom I thought to have been quite the opposite (well at least in this first book of this series).

Plaidy also brings in Louis’ children (mostly daughters) and shows us the King as an overly protective, doting
- father.  we get a good taste of what the princesses were like as well.  Louis was also a most loving husband. Yes, another surprise, this Queen was blessed with Kingly love. Too much love, in fact- Louis was insatiable. Sadly we see how their love slowly digressed- but the respect remained and neither was really to blame. Louis really tried.

As far as the country went, France loved her King. Louis could do no wrong. It was all the fault of either his ministers, tutors, queen or mistresses. Louis was their hero, but how long could they sing that tune? The seeds of the Revolution were slowly taking root. For how long could Louis remain The Well Beloved?

I f you love French history, and all the eccentricities of etiquette taken too far, along with a good dose of rapturous forbidden love- this Plaidy is for you. I absolutely must read 'Road to Compiegne' next- which is the sequel to this one.

I’m presently reading Louis The Well Beloved and could not wait for the end of the book, or my review before bringing up one very influential woman of the court at the times (not in a good way though..)
Jeanne Agnès Berthelot de Pléneuf- better known as: Madame de Prie 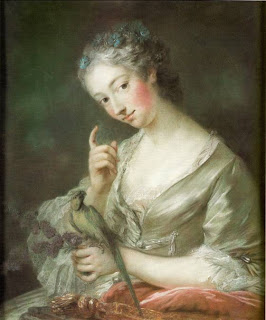 by Jean-Baptiste Van Loo (1684-1745)
Madame de Prie (1698- 1727) was very present in the life of the young Louis XV.  As mistress of his uncle Louis Henri, Duc of Bourbon, she had a say in everything.  The latter was the grandson of Louis XIV (through his legitimized daughter... but that’s another story).  Anyhow, the Duc of Bourbon was legally in charge of the country and of the young King Louis XV for awhile...but his guidance and ruling were all under the influence of the grand ruler herself- Madame de Prie.
She was only 21 when she actually set foot as a predominant figure in the French court. Nonetheless, this dame was experienced anD ruthless to the max.  The whole country hated both her and the Duc for rising prices and all that was spent on lavish extravagances to benefit the two of them. Advancement is what it was all about for her.  She wished to rule France this way forever- and the best way to do that was for her to choose a rather seemingless, harmless and totally banale bride for the King-This way she could go on her merry way of ruling with her lover along the sidelines and reaping the benefits as the true queen 'herself'.
Who better to suit the situation than Marie Leczinska, whose father was nothing more than an exiled king of Poland? You couldn’t get any lower.  Plus, the queen-to-be was more than a few years older and, not that pretty at all.  Yet- Lo and behold, when the 16 year-old Louis first set eyes on her, he became totally infatuated by her.  Love, love, love.  First comes love, then comes marriage, then comes the baby in a baby carriage...
This could have been all fine and dandy, except that Queen Marie felt completely in debt to Madame de Prie and the Duc, so she of course was duped into believing and also being part of their scheming- a total naive.  The main plot was to rid themselves of Fleury, the King’s beloved Tutor.  The Duc and Company thought he was too close to ruling supreme because of his influence on the king...so, they needed to get rid of him.
Needless to say, the king caught on and that was the end of all of Madame de Prie’s scheming.  Exiled to Courbepine, the grand lady sipped her own poison and committed suicide the following year.
Note:  Throughout my read, I may be posting more villain laides- leading to my book review.  Stay tuned.  Louis VX’s life was filled with ladies and vixens it seems..
Posted by Lucy at 8:00 AM 6 comments: 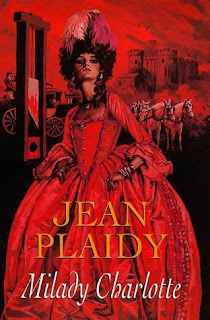 Based on fact this is the dramatic story of Charlotte Walpole, who left her comfortable Norfolk home to act at Drury Lane, married Sir Edward Atkyns, and attempted to rescue Marie Antoinette from the guillotine.

It is also the story of Homer, the passionate, impulsive girl from the Cornish parsonage who, unwanted in her own home, joins her distant relation, Charlotte, in London.

Involved with the are Richard Danver, in the service of the British government; Jean Pierre de la Vaugon, serving the French government, the aristocrat who cannot hope to escape the attentions of the mob; the lecherous Sir Edward; and Sophie, the young girl for whom the guillotine is waiting.

The story, moving swiftly from the Cornish parsonage to London, Norfolk, Lille and Paris, tells of the loves and adventures in the lives of two very brave women. It will delight all readers of Jean Plaidy's memorable novels.
Posted by Arleigh at 3:41 PM 1 comment: