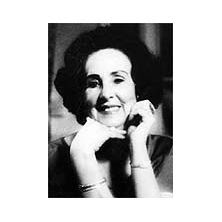 What is it about Jean Plaidy that has millions of readers so fascinated by her writing? Obvioiusly her prolific style and impeccable historical accuracy are major reasons why so many people love her books- BUT, there’s something more than just that...if you’re hooked on Plaidy like we are here at Plaidy’s Royal Intrigue, you’ll get what I mean...don’t you find that her characters literally come to life...almost like spirits telling their own story? I always get that feeling. It’s almost as though the characters had some private meeting with her where they shared a real heart-to-heart and then Plaidy got privy to writing all about it. Another thing that always seems to amaze me, is that (in my experience) I’ve yet to read a book of hers that I didn’t get totally sucked into-Yes- her books capture my entire attention and set me off to the very time and place-always!

It’s all so mysterious. And while we’re on the topic of mysterious; what about the Plaidy Lady herself...I believe she’s the most mysterious yet! I wish I could come across some bit of biography or tip on how she lived her life- something (besides the only source we have on her so far- read it here) that would shed some light on how she went about her writing and life.

So, Arleigh and I thought how nice if we could honor her Birthday with an improvisation interview (a mock interview if you like;)- Just to get a feeling of what a conversation with her might sound like.

Let us know if you thimk she waould have said it diffefrently! Join in the fun!

1. Is there a particular period that fascinates you most? Which one and why?

I think it's apparent that I prefer writing based on my own country's history, though I cannot claim a particular favorite era. I enjoy giving voice to the misunderstood and there are very many among the British royalty and nobility who fit into that category.

2. Of all the novels you’ve written, which is your favoirite- why?

I quite enjoyed exonerating both Anne Boleyn and Catherine Howard in Murder Most Royal, before writing their own individual stories in The Lady in the Tower and The Rose Without a Thorn. Henry VIII was a most interesting character to develop owing to his need to quell his conscious yet follow his desires. The careful reader will pick up on my disdain for the man, though I feel I did him justice.

I heartily enjoyed writing the witticisms and jolly nature of Charles II in my trilogy: The Wandering Prince, A Health Unto His Majesty and Here Lies Our Sovereign Lord. You can also find quips from him in related novels on his wife, brother and nieces. Charles is my favorite royal for his humor, courage and loyalty. He charmed the people, walked among them and helped extinguish the Great Fire with his own hands. He did not discard his wife, though she was barren and Catholic. Oh yes, he was unfaithful, but respectfully so and never did he dishonor her as Queen. He may have been lackadaisical in the political and religious arenas, but we see with his brother, James, how being otherwise cost the throne.

4. Is there any historical figure that you have not written about that you wish you had?

Many, but a writer has to tell the stories that demand to be told. Fifty years of writing is a wonderful gift and I have done with my time as well as I could. I'm sure my readers would have appreciated more novels set on the Continent, but it cannot be denied that the British monarchy is full of tales enough to busy any writer. I did, however, venture from England under my nom de plume Victoria Holt; places such as Italy, Southern France, Australia and the Orient.

5. We know that you typed away diligently at your typewriter on a daily basis. What was your source of inspiration? a particular muse perhaps? And what special advice can you give aspiring historical fiction writers?

I love to travel and discover new places, which leads to fantastical story lines and wonderful characters. I've spent my later years on cruise ships exploring the world, and it's all the muse one needs! As for advice: read as much as you can. Reading is experience. Had I not had so much free time in my youth I do not know if my love of history would have been established.

6. Lastly, Ms. Plaidy is there anything you would like to share with us regarding your private life…(some of us would love to know your favourite colour, if you own a pet, had a best friend…?)

I am not overly fond of animals, except perhaps the exotic birds I have encountered on my travels. Sadly my solitary lifestyle does not afford me the opportunity to confide in any one special person, but I have many friends with whom I correspond regularly. My favourite colour is Royal Blue.

And we end this BIRTHDAY CELEBRATION with a gift to you Plaidy lovers! One brand new Arrow reprint (UK version) of Madonna of the Seven Hills to a lucky winner! This giveaway is open worldwide and ends September 13th. 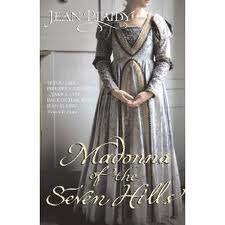 "In a castle in the mountains outside Rome, Lucrezia Borgia is born into history's most notorious family. Her father, who is to become Pope Alexander VI, receives his first daughter warmly, and her brothers, Cesare and Giovanni, are devoted to her. But on the corrupt and violent streets of the capital the Borgia family is feared, and Lucrezia's father causes scandal, living up to his reputation of 'most carnal man of his age'. As Lucrezia matures into a beautiful young woman, her brothers are ever more protective and become fierce rivals for her attention. Amid glorious celebrations their father becomes Pope, and shortly after Lucrezia is married - but as Borgias the lives of the Pope's children are destined to be marred by scandal and tragedy, and it's a fate that Lucrezia cannot hope to escape."

For those who may be wondering just where in the heck Lucy & Arleigh have been... well, it's been a very busy summer! We plan to be more active so look for new reviews and posts soon! The Jean Plaidy Challenge is still open and the pages will be updated shortly. Thank you all for visiting!
Posted by Arleigh at 8:15 PM 24 comments: