review: A Favorite of the Queen 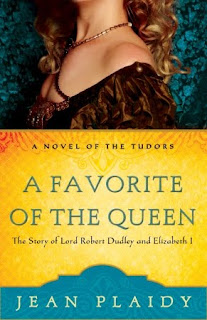 A Favorite of the Queen

The story begins with Robert Dudley’s father at the execution of his father, Edmund Dudley, who had been used as an example to the people that the new King Henry VIII would please his people. The elder Dudley was Henry VII’s cruel tax collector and as such deserved to die a traitor’s death. John Dudley grew up to regain both his family fortunes and titles, though it was hard-won through battle and diplomacy. He formed the right connections at court, married his children off well and set them on the path to prosperity. Unfortunately for the Dudleys, their reins on the government ended when they supported Lady Jane Grey instead of Mary Tudor on Edward VI’s death.

Elizabeth and Robert met in childhood through the royal children’s classroom. He found her haughty, yet fascinating and she found him too outspoken for someone she deemed beneath her. They next meet at the Tower when each is imprisoned by Queen Mary. Elizabeth is free to walk the grounds and soon finds a way to communicate with Robert, which soothed them both during those perilous months.

As promised, Robert was the first to inform Elizabeth of her sister’s death and she instantly made him Master of the Horse. From here the story is less detailed and moves swiftly through Elizabeth’s reign with Robert at her side. One of the most impressive parts of this novel is the descriptions of Elizabeth’s mindset. For example:

“To England the Queen was a symbol. She gathered handsome and chivalrous men about her; they must be gallant and adventurous. She wished to be to them a fair ideal, the mistress they all wished to serve because they were in love with her perfections; yet she was the mother, and their welfare was the clearest concern of her life. She was Woman, warm and human, yet because she was an anointed Queen, she was invulnerable and unassailable. She wanted her men to be bold, to perform feats of courage and adventure for her sake; these she rewarded with her smiles and favors. She was a spiritual mistress; they must be faithful to her; they must perpetually seek to please her, their thoughts of her, must be the words and thoughts of lovers. They must all be in love with her; to them she must be the perfect woman. But they must never forget that she was mistress of them all. And while to her handsome and gallant courtiers, to her statesmen and soldiers, she was the queenly mistress and beloved woman, they must constantly remember that to her people she was Mother—the all-embracing Mother-and her thoughts and her energies were directed toward the good of her people. She wished England to be a happy home for her people—a prosperous home—and as, to her belief no home could be happy and prosperous unless it were peaceful, she abhorred war.”

The book description of the reprint puts emphasis on the death of Robert’s first wife, Amy Dudley, which is understandable even though that particular event was not the basis of the story. Plaidy wrote an Author’s Note to explain her thoughts on the mysterious death and why she came to the conclusion that it was, in fact, a murder arranged by her husband. However, Amy death continues to haunt Robert throughout his life and in this sense Amy’s story is one of the main focuses.

This is not an amazing read for the Tudor expert, or really even the casual historical fiction fan with knowledge of the Elizabethan times. I cannot claim one event from the book was new to me, but then I have also read Queen of This Realm and My Enemy the Queen, which are both detailed reads on Elizabeth, Leicester and Lettice by Jean Plaidy. It was a good refresher, especially with the Queen’s martial issues, foreign relations and much philosophizing on her thoughts and behavior. Overall, I count it as an enjoyable read, but not one of my favorite Plaidy novels.
Posted by Arleigh at 7:19 PM 6 comments: