Book Review: The Thistle and The Rose 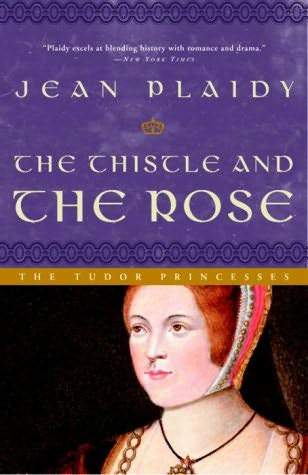 This Plaidy novel begins with Margaret Tudor as a young girl. She is portrayed as strong-minded and very defiant, yet close to Henry, her brother. I love the way from the very beginning the two of them go at it in terms of who will rule first. Margaret is so intent on getting married and when all of a sudden it’s decided that she is to be wed to the King James IV of Scotland, although she is somewhat reluctant, she’s also extremely delighted.

From the moment she meets him, she becomes totally enamored with the King, whom she thought to be the handsomest man ever. Margaret is but a young girl, but being a Tudor in every way, her appetite for love is strong and her passions difficult to curb. The King enjoys his young bride and the marriage is seemingly perfect. It’s only when Margaret discovers that the formidably charming and irresistible James is also very much the ladies’ man…her heart is shattered.

King James is a kind man at heart, and although he cannot refute his passions, he still makes sure that his Queen never goes amiss of anything. He respects and nurtures her, and also takes care of her every need. They go through much hardship as the Queen suffers many miscarriages and deaths of their children. Finally, she bears him two sons; future heirs of the Scottish throne.

The happily-ever-married does not last forever…Margaret is terribly hurt from James affairs and she seeks her own adventures. When James dies, she goes on to marry the Lord Angus, to the dismay of all of Scotland. He was a Douglas, and thought to be extremely detrimental for the fate of their country. Nonetheless, Margaret made the terrible decision to marry Angus, for she cold not bear to not live out her lusty passions.

A tragedy suddenly hits when the youngest of her two sons, while under the guidance of the Duke of Albany (brother to the former King James) dies from the pox. Margaret is convinced that Albany wants to be rid of the boys to conquer the throne himself. She compares him to the late Richard III and the boys in the tower. A love-hate relationship begins…

The story unfolds with Margaret in continuous struggle to be back with her son, the King, and rid herself of Albany. But in the meantime, she also discovers Angus to be unfaithful. This leads her to having another affair and then again another marriage…another bad choice. Henry VIII, her brother, who is now King of England, is always in communication with his sister. Many a times, she finds refuge and assistance by his side- except when he does not want to acknowledge her divorce from Angus…for religious purposes (suitable to him until he seeks similar cause with his own once-beloved Anne…)

This story is continuously on the move. Margaret, who is so much like Henry in so many ways, is always ruled by her heart and passions rather than by logic. A Tudor weakness that is too often the blame.

I really enjoyed this novel especially because of the history. From the beginning, right up to the end, starting with Elizabeth of York, all the way to James V’s first wife and Henry’s Jane Seymore, the novel, through its historical figures and happenings, pieces the puzzle of this wonderful time in history.

I totally enjoyed reading about this feisty lady who loved passionately- all she wanted was to find someone who loved her deeply in return...The characters, the history, everything was incredibly entertaining. I highly recommend The Thistle and The Rose to anyone who’d love to read a great summary of what happened back in Scotland, England and France in the times of Margaret and Henry. It’s all Tudors and Stuarts. Loved it!


NOTE: I must also mention that this novel is filled with 'Incidentals'- so you can be sure I'll be writing a few posts on these as well. It's just too juicy.
Posted by Lucy at 7:01 AM