Review: Victoria in the Wings 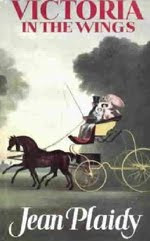 Victoria in the Wings is not, in fact, about the girl who became Queen Victoria, but of how she became the heir apparent when there were so many in the running. The story begins with the death of Charlotte, the Regent’s daughter, and the unrest it caused the royal family, as she had been the only legitimate grandchild of King George III. Two of the sons were prevailed upon to marry and produce heirs: William, Duke of Clarence and Edward, Duke of Kent. Protestant German wives were provided and the race began!

Lurking in the background, however, was the fifth son, Ernest, the Duke of Cumberland and his wife, who was not accepted into the family, though she was of noble birth. Both had a reputation for ambition and a cloud of suspicion over mysterious deaths. Though they had a son, he had little chance at the throne as long as Clarence and Kent provided heirs.

We are introduced to Adelaide, Duchess of Clarence, who is the gentlest woman imaginable, and Victoria, Duchess of Kent, who is like a lioness with her cub (the future Queen Victoria). Every member of the royal family seems to quietly watch the others for news of pregnancies and unfortunate failed attempts. As you may imagine, there wasn’t an abundance of good cheer among the Hanovers.

Adelaide, however, was a joy to read about! She was the only person among the entire family who loved all children and was completely sweet without a jealous bone in her body. She insisted the Duke’s children by Dorothy Jordan live with her and their mother’s portrait stay in the family home, looking down on their happy arrangement. That she eventually became Queen is my only consolation for what she endured – the failed pregnancies, calming of her husband’s sometimes eccentric nature and the rivalry with his brothers. The book ends at George IV’s death, though we get a feel for the new reign of King William IV and his gentle Queen Adelaide.

As for Victoria, it is the beginning of her imprisonment in Kensington Palace. While it was necessary to keep her confined and watched throughout George IV’s reign (as he kept the murderous Duke of Cumberland close at hand) her later confinement is an attempt by her mother, along with her comptroller (and perhaps lover) Sir John Conroy, to subdue her so they could be the power behind the throne when the time came. The next book in the series is The Captive of Kensington Palace.

This is one of my favorite Plaidy novels! There is so much intrigue and plenty of personalities are represented: those to love and those to hate. The Duchess of Kent shows many negative qualities and it is very apparent that she would become overbearing toward her daughter. It is said that King William IV purposely lived until her 18th birthday so that she would be of an age to rule without a regent (her mother).

George IV is to be pitied, as he is old and very sick, and wants his Maria, but is still too proud to recall her. He hangs on to his last mistress even though he has no love for her, or even a wish to have her around for company, as she is a selfish, stupid woman. He simply doesn’t want to be ridiculed or die alone. And though George is in such a condition, he is still the most elegant man in the country and can charm those around him effortlessly. Such complexity is the magic of Plaidy!
Posted by Arleigh at 8:59 AM