Book Review: The Road To Compiegne 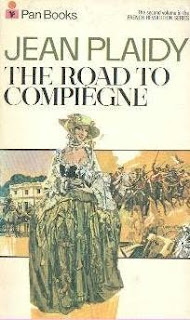 The Road to Compiegne
This one is the second in the Revolution Series by Jean Plaidy- and I absolutely loved it!  Moving on from the first book, (Louis the Well-Beloved- see my review here),  which portrays Louis from birth to the beginning of his relationship  with La Marquise de Pompadour- in this volume, Louis goes from well-beloved by his people, to completely loathed. Hunger is prevalent and the country is in turmoil, but Louis rather than owning up to his responsibilities, lives in complete denial while alienating himself all the more.  He can no longer travel to Paris due to the extreme danger it poses him.  The people are enraged and blame his excessiveness and abiding loyalty to La Pompadour for their misery.  He is considered a weak ruler that takes counsel from his mistress to reign over the country.
La Pompadour certainly had her say in politics and did advise Louis on all matters of state, however, much of her say was based on how Louis felt- literally. When Louis was down and feeling horrible about himself, Madame la Pompadour would do anything in her power to make him feel as though it wasn’t his fault- this set her in an advantageous position: She became the person he most wanted to be with- his true friend and confidante...someone he would always want around him.
For La Pompadour, Louis meant everything.  She needed to keep him happy and content in all ways...BUT- there was one area where she just could not keep up with him.  Louis was an insatiable lover and La Pompadour, who was rather frail in health, could not deliver...so, she thought of a little solution.  In order to keep Louis ‘content’ she provided him with young (but not particularly bright or ambitious) young girls to service him.  Meanwhile, she strategically moved out of Court to her own place, in order to offer the people a diversion- Now no one could say that she was coercing the King in matters of politics or as a ‘mistress’. She would now be known as his ‘good friend’.  This way she covered her reputation, kept the King by her side for all emotional comfort (which he constantly needed) and gave him his pleasurable diversions.
This plan would go on until the very end.  When La Pompadour died, in came La Du Barry; A complete turn-around in terms of class and composure.  Yet, Louis was bewitched by her to his very last days.  The book also brings us Louis’ daughters and the longing, yet never fulfilled relationship they so needed with their dad. There was much competition, slyness and direct confrontations all for the love of their father.  It was a constant trial to rid him of his mistresses (they never succeeded).  Marie Antoinette also appears by the end of the novel.
Excellent book about a period I am most fascinated by- so I’m now really looking forward to reading Extravagant Queen.
I love this series!
Posted by Lucy at 2:52 PM