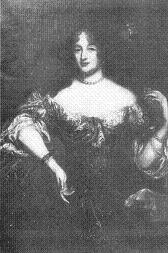 Conniving by nature and extremely manipulative, her determination to succeed at all costs in terms of ranking, money and power led her to the position of mistress to Ernest Augustus. From that point, she was able to control and operate the dealings through Ernest Augustus’power. She obtained the Countess title and high ranking positions for her husband of convenience, Franz Ernst Graf von Platen.

Her debut in the court of Hanover was schemed by her own father and assisted by the help of her sister. Clara danced and used her French savoire-faire, learned in Versailles under Louis’ rule to astonish and mesmerize the German court. This is where she slowly but surely enraptured Ernest Augustus.

Being ravenous by nature, her greed and wants did not end with Ernest Augustus. Clara was known to have other lovers as well. She seemingly fell for the Count Philip of Konigsmarck and could not bare any other woman to be by his side...especially Sophia Dorothea.

She became extremely possessive of him to the point, it is believed she was directly responsible for his murder. Clara was deviously into everyone’s lives for the purpose of advancing her own destiny. At the end, the woman who had been detrimental in destroying the lives of so many, died an excruciatingly painful death.