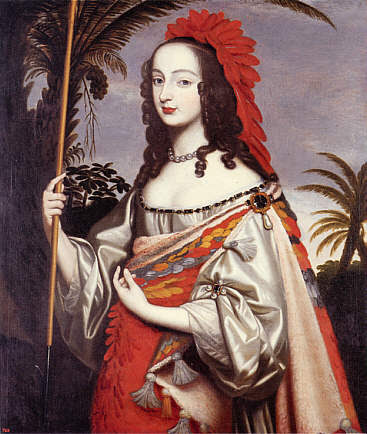 
What a gal…She looks so beautiful and placid in this portrait; nothing like what she’s depicted in the Princesse of Celle…

Duchess Sophia was the youngest of 5 daughters of our Incidental lady, Elizabeth, Queen of Bohemia. She was actually born in Exile and when she was older went to live with her brother Chatrles II Louis. From a very young age, she was very bright and determined. The Duchess was very literate and enjoyed the works of Descartes and the likes. Her main concern was becoming Queen of England, and this would have been possible if only (as she'd hoped)her cousin Anne had passed away before her.

Obtaining the crown was a lifelong quest for Duchess Sophia. After agreeing to marrying Ernest August, in a marriage of convenience, she was always devising ways of escalating her name and family’s worth- through titles, money and properties. She never let any of her emotions rule her.


Duchess Sophia was also the mother of George I; whom she considered to be the dullest of her sons and the least worthy of the throne. Of all the emotions she managed to keep in check, her jealousy towards her French sister-in-law, Eleonore d'Esmier d'Olbreuse was the only one she could not contain. She despised this woman for having a loving relationship with her husband and for raising the seemingly perfect princess, Sophia Dorothea.


Despite the jealousy, her love of money and quest for power prevailed. Against the will of both Eleanore and Sophia Dorothea, Duchess Sophia was instrumental in the evolution and planning of the marriage between her son George Lewis and Sophia Dorothea- a marriage of convenience, reconciliation between the fathers, and a chance of uniting royalty.


Duchess Sophia was a rather healthy lady who lived a long life. She met her end one afternoon after her daily walk in her gardens. To seek shelter from a sudden downpour, Sophia ran for cover and suddenly collapsed. She was 83. Her cousin, Anne, died a few months after that...