The Princess of Celle- Book Review 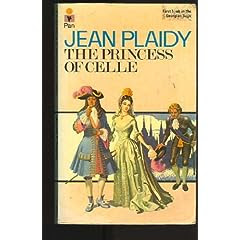 Being a habitual history devourer of the French and British monarchy, this German-based novel was an unexpectedly welcomed and delightful read. I enjoyed the differences of customs and comparisons to the French court in terms of gallantry, food and fashion.


The Princess of Celle is gradually unraveled by leading us through the generations of the German house of Brunswick-Luneberg. The story begins with the two brothers, George William and Ernest Augustus with their not-a-care in the world attitude towards life; they traveled, loved, drank and made merry until their eventual time for marriage.


William, who had been chosen to marry Duchess Sophia of Heidelberg, ( who by lineage, dreamed of a possible shot at the throne of England- this being one of her main preoccupations) refused her on account of his wanting to live as a bachelor forever. He asks Ernest Augustus, who was the younger and dotingly admiring brother, to take his place in this marriage. To persuade Ernest Augustus to marry, William agrees to give any possibility of ascension to the throne, as well as his duly inherited rights. Duchess Sophia becomes resentful of this rejection by William, but being the staunchly brought up monarch that she was, agrees to marry Ernest Augustus. Theirs is from the start a marriage of convenience; which suits them both perfectly well.


Then, the inevitable happens; William falls in love with an exiled French princess, Eleonore d'Esmier d'Olbreuse, and decides to marry her. This is not well taken by Duchess Sophia who continuously makes her life a living misery. Nevertheless, William and Eleonore are extremely happy and soon they have a beautiful and much doted upon princess of their own; Sophia Dorothea. Unfortunately, no one in this precious family is recognized as having any titles because of William’s previous relinquishing of all rights. Continual struggles and barriers (imposed by Duchess Sophia) make it almost impossible for this right to be returned and finally awarded.


When the story finally focuses on Sophia Dorothea, it becomes extremely intricate. Many more characters are brought into this maze of happenings. The worst of all is Clara Von Paten, mistress of Ernest Augustus. This horribly scheming woman was responsible for the demise of all of her victims; Sophia Dorothea being no exception. The poor princess lived a life of total unhappiness. Who would have thought that this much loved princess, who was brought up by the most caring and loving parents, would have ended this way? Throughout her life, she was kind, loving and always careful to do the right thing; for her parents, in-laws, husband and children. I felt so sorry for this real fairytale princess. You’d think she could have at least been granted true love and a happily ever after…


I really enjoyed this novel of intertwined lives and unexpected consequences. I felt like personally avenging Sophia Dorothea, while wishing vicious revenge on Von Platen. The life and times of the characters in Princess of Celle revealed a never ending intrigue. Excellent read.

Follow-up Posts for this novel:


Let's not leave the gentlemen out...