Book Review: The Rose Without A Thorn 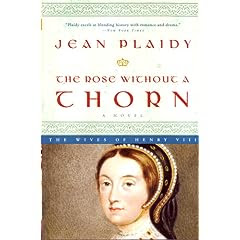 This novel of Katherine Howard, the fifth of Henry VIII’s six wives, was a very enjoyable and clarifying historical read. To begin with, let’s agree that Katherine was never given a fair chance in comparison to the King’s other wives. Katherine was not as extravagant, well-known, or amazingly beautiful as some of the more renowned ones were. She was extremely young to be a bride; a child in fact. So, this in itself puts her in a category of her own.

The author brilliantly exposes this fact by writing in the first person, so that we are never to forget the fact that she was merely a child. Reading it from this point of view makes the history so much more understandable. It is difficult to be judgmental towards Katherine in any way when you read the story through her perspective.

Katherine Howard’s life is pretty simple up until she moves into the Royal Court; where, she is ultimately set-up for her demise. The events in her life unfold like a cruel domino effect, led by the deceptions and scheming of others leading Katherine to her tragic end. Her innocence, kindness, curiosity, and acts without malice, rendered her character simply endearing. Plaidy captures the essence of this Child-Belle enraptured in a world of delusion, schemes and intrigues. The game was too quick and too fierce for her to endure. Inevitably, this young girl’s innocent and hopeful nature could never survive in the vulturous world of Henry VIII.
The Rose Without a Thorn is a quick read that moves you from one scene to the next in smooth and inviting transition. The passages are moving and although I often felt exasperated by some of Katherine’s decisions and motives, I felt I understood this character precisely because of her circumstances. The build up to the tragedy is difficult and ultimately heartbreaking. Excellent read.
-
Posted by Royal Intrigue at 5:20 AM