Can you hear the whispering around this lady’s ‘accidental’ death? For the longest time there was (and historians are still not settled on this one), doubt on how Amy Robsart Dudley died.

She and Robert Dudley (the then future Earl of Leicester) were both married around the age of eighteen. Dudley was a busy guy even back then, when his father took him often to Court with him. When Edward VI died, Dudley was part of the plan to place Lady Jane Grey on the throne and was consequently sent to ther Tower. Amy visited him there regularly.

When he was released, Dudley led a very eventful life in Court and this was even more so when Elizabeth reigned. Amy began to feel neglected and often depressed. The rumours of her husband being the Queen’s favourite and having an alleged affair, along with the suspicions of him marrying Elizabeth upon her death, nearly drove her mad.

There’s another side to this however…Amy was also known to suffer from what we now know as breast cancer (possibly causing debilitating pain and an associated depressive state- leading to suicide). It’s also speculated that she may have suffered from osteoporosis (which could explain her fragile neck easily breaking from the fall). Other thories have given light to the possibility of Amy having had an aneurysm (which either caused the fall –or happened immediately after)…

Nevertheless, on a Sunday in 1560, Amy decided that her servants, despite their contrarity to this, should go to the Fair. She remained at home with Lady Owen. When the servants returned they found Amy dead at the bottom of the staircase.

Did she have a stroke? Was she depressed enough to finally end it all? Was she pushed down the stairs? Was this a contracted hit? Or had she simply slipped down the stairs? History still isn’t clear on any of it. Without alluding to any partaking of sides in this very shady situation, the fact still remains that Robert Dudley never ran to the fatal scene to be by Amy’s side; nor did he even attend her funeral… 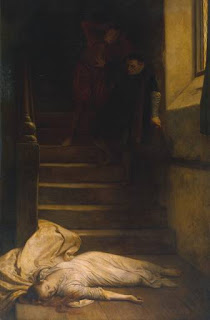 Any idea as to what really might have happened?
-
Posted by Lucy at 6:42 AM