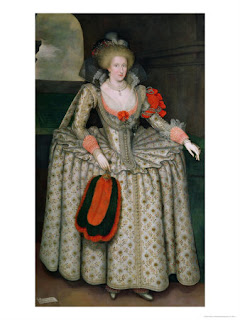 Anne of Denmark, wife of James I of England and Scotland


* minor character in The Murder in the Tower

As depicted by Plaidy, Anne of Denmark was a frivolous, pleasure-seeking kind of woman who loved her children and made them her priority in life, followed by displaying her extravagance and planning court entertainments. James had apparently traveled to her homeland to collect her after she had a near-disaster crossing the channel. They had a happy early marriage, but it was soon marred by James’s peculiarity and Anne’s anger from being separated from her children. She loathed her husband’s fondness for young, handsome men though tolerated it, keeping her own court.

Anne was born in Denmark in 1574, a second daughter. In early childhood she was raised by her maternal grandparents in Germany. Scotland was initially interested in her older sister, but she had already been affianced to the Duke of Brunswick. James accepted Anne, who was 14 years to his 23. It has been noted that she considered herself in love with him, though there were already rumors of his special relationships with men. Anne did not hear of them and his daring journey to meet her and take her home to Scotland must have cemented her new love. He wrote her poetry and seemed to be genuinely happy with his marriage.

Their first child was not born for 3 years, sparking more rumors – both about James and Anne. After Prince Henry was born, the real problems started within the marriage. Anne wanted her son with her, but James insisted on taking him to Sterling Castle to be raised by the Earl of Mar. Anne fought for years, using every political angle to get her way, but by the time Henry was 9 she had only been allowed to see him a few times.

Anne had ten pregnancies with three ending in miscarriage, all of which were brought on by emotional distress at the forced separation. Four of the seven children born alive died in infancy or early childhood. With her last child, Sophia, Anne almost died in childbirth and the child died within a day. Anne decided she was not having any more children, which further strained her relationship with James.

A great lover of the arts, Anne’s court was lively and entertaining. She enjoyed living extravagantly: rich, beautiful clothes, jewels, as well as costumes for the many masques she commissioned. Sometimes she would perform herself. This went on well into her thirties, though by forty she withdrew from court as her health deteriorated. The death of her beloved son Henry seemed to take a great toll on her. Her daughter Elizabeth married into Germany and the only one of her children left to her was her son Charles. He stayed by her bedside throughout her illnesses and until she died. James, on the other hand, did not. His final goodbye came in the form of a poem after her death:

So did my Queen from hence her court remove
And left off earth to be enthroned above.
She’s changed, not dead, for sure no good prince dies,
But, as the sun, sets, only for to rise.