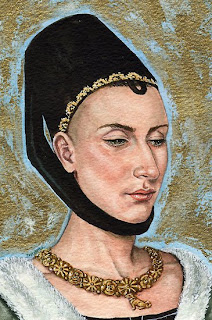 The story behind this lady is that she was instrumental in indirectly putting Richard of Gloucester on the throne.

Apparently, it all began after the passing of Eleanor’s husband (Sir Thomas Butler), whose father could not repossess two properties because he didn’t have the appropriate transfer permit to do so. As a result of bad (or non-existent) paper work, Edward lV took advantage of this opportunity to seize them himself.

Since Lady Eleanor wanted her properties back, she went directly to the king and asked for these in return. Being the ladies’ man that he was, Edward did what he did best when it came to women; he tried to seduce her. Story has it that Eleanor did not succumb. Rather, she came out of this with both her properties and a pre-contract of marriage. Whatever happened after that is a mystery…except that Edward then secretly went on to marry Elizabeth of Woodville (Why all the hush? Was he worried about Eleanor coming around and spilling the beans?)

Someone else though, it seems, was ready to tell all…that awful nuisance of a brother, George the Duke of Clarence. We’ll never know if he truly succeeded but one thing we do know is that he was found drowned in his favourite drink. This would all come out after Edward’s death, with Robert Stillington, Bishop of Bath, confessing that he knew the whole thing to be the truth, since he was the one who had married them…really? He had apparently shared some of this truth when he did time in the tower with Clarence. After this announcement Edward’s boys were no longer legitimate heirs to the throne. And- Richard of Gloucester became King Richard lll.

So what of Lady Eleanor Talbot Butler? The truth behind her marriage to Edward will continue to remain a mystery, since Henry Vll asked that all copies of the acts deposing Edward be destroyed. But- after Richard’s death, new evidence by Tudor historians found that after all that, Eleanor was not the one! Stillington actually had another woman named Elizabeth Lucy (also known as Elizabeth Wayte) married to Edward.

All we do know for sure is that Eleanor ‘died in a convent in June 1468 and was buried in the Church of the White Carmelites, in England’.