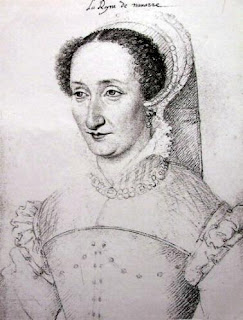 Jeanne was the daughter and heir of Marguerite of Angouleme (sister of Francois I, king of France) and Henry II of Navarre. She married twice, but the first – a match with Anne of Cleves brother, William — was annulled on the grounds that it was not consummated. The second was to Antoine de Bourbon, a love match which resulted in the birth of five children, with two surviving to adulthood. She was a fierce Huguenot (France’s reformed religion) and spent her later years working for this cause. One of her last political moves was to marry her son Henri to Catherine de’ Medici’s daughter, Margot. She died soon after traveling to Paris, some say of poison by the Queen-Mother’s profumer.

Evergreen Gallant is the story of Henri IV of France, Jeanne’s only surviving son. However, the story begins with her pregnancy with Henri. Jeanne’s father wants him raised as a man of Navarre, not a court gallant like Jeanne’s husband. And so he has a peasant woman take him into her home to nurse him. Jeanne attempts to instill in him his duty as heir to the throne of Navarre and religious reformer. With his mother’s help, at age 14 he heads the army as small skirmishes arise between the Catholics and Huguenots, though he is not fully interested in the role of soldier. He begins his amorous ways, which incense Jeanne because he cannot be serious minded and focus on what she deems important. She does not trust Catherine de’ Medici, but meets with her to plan the nuptials of Henri and Margot. Just when it seemed negotiations had stalled and Henri was still safely out of Catholic Paris, Jeanne dies a rather swift and suspicious death, prompting Henri into enemy territory. The wedding plans go forward, bringing many Huguenots into the city and setting the stage for the St. Bartholomew’s Day Massacre. Henri, Jeanne’s hope for Navarre and the Huguenot cause, was then imprisoned at the French court.

Of course, there is much more to Henri’s story in this novel. Ultimately Jeanne helped shape his character as a military leader, if not his ways with women.