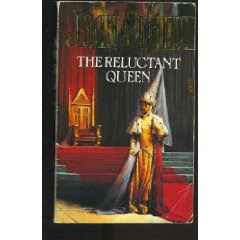 Anne Neville, second – born daughter of Richard, the Earl of Warwick met Richard at Middleham Castle when they were young children. Anne immediately befriended the reserved and frail-looking boy. The bond and friendship they shared grew into a relationship of caring, trust and love that would eventually bring them to marriage, a coronation, a son, to culminate with the early death of Anne, at age 42.

Of course in between all of this we relive the making (by the Kingmaker Warwick, Anne’s father) of Edward lV; the descent of Henry Vl, the Woodvilles, Margaret of Anjou, the treasons and the tragic deaths. As fate would have it, nothing went smoothly. It was, after all, the time of the War of the Roses…

I very much enjoyed this book as it took me through Edward lV’s reign and the details of his family, which of course included his brother Richard. Much of Richard’s personality is seen through the eyes of Anne, as are the rest of the characters in this novel. Consequently, I began seeing many of the historical figures encountered in this novel, from a different perspective. Anne was a keen judge of characters who portrays Richard as a loyal brother to the King, as well as a fair and just man, but, also a caring and devoted husband. Anne immediately recognizes Richard’s brother, George, who was also her sister’s husband, as the devious and scheming character that he was. Through Anne’s eyes, I became a loyal Yorkist who admired King Edward and his charming good ways. Margaret of Anjou, detested at first, became an understanding woman capable of showing compassion and care when Anne became close to her during her short betrothal to this Queen’s son. I despised the whole Woodville clan, starting with Elizabeth Woodville, Edward lV’s Queen.

Anne Neville, in all her simplicity, succeeded in being admired by all. She was a loving and loyal wife to whom Richard confided all his worries and intentions. She was a doting mother who cared and worried constantly for the health of her son. Her own health was very frail but this did not keep her from wanting to be by her husband and son and fulfilling all of her duties. Towards the end of the book is where Anne’s personality takes on a less affirmative role. Much of her self confidence is lost to the persuasion that Richard wants to be rid of her, only to replace her by his own niece, Elizabeth of York, King Edward’s daughter.

This obsession consumes her as she slowly convinces herself that the only reason Richard ever married her, was for her to produce an heir to his throne. Towards the very end of the novel there is a climatic moment revealing much of what Anne suspects of both Richard and Elizabeth, his niece. Plaidy ties this exceptionally well by setting the mood; where anticipated celebration is destroyed by what Anne believes to be obvious deception. I felt her torment, and her spirit crush.

The story moved along at a very good pace. I must admit though, that some transitions seemed a bit ‘cut-off’ (especially in cases of tragic moments and deaths). These, I believe could have used a few more lines that would have made the episode much less mechanical, while providing the reader with more feeling for the moment. On the other hand, a story with such tremendous continuous evolvement could not have been told without these needed constraints.

The title for this novel is perfectly suited. No other word but ‘Reluctant’ could have better described how Anne felt as a Queen. Plaidy delivered once again in terms of historical accuracy and depiction of characters; even when seen from another perspective. Although The Reluctant Queen was not passionate enough to move me to tears, this Plaidy novel is outstanding in terms of capturing the historical essence of the time. I would highly recommend this book to anyone needing clarification of the many historical figures and events that happened during the War of the Roses (which can, at times, be so confusing).