Book Review: Indiscretions of the Queen 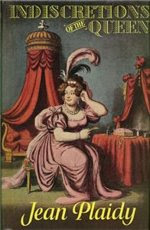 Poor Caroline of Brunswick! Did she really not know any better? Could she have maybe toned things down a notch…be a little less eccentric maybe? Regardless, I doubt that would have changed George’s mind in any way…Caroline was doomed from the beginning.

The story of Caroline of Brunswick and her sad marriage of convenience to George, the Prince of Wales- later King George IV of England, could not have joined two of the most mismatched people ever. The very eccentric Caroline was loved by the people of England, while the ever-so- perfect George despised and rebutted. All that the princess ever wanted was a loving family with lots and lots of children. The prince, on the other hand, was totally into himself and all he wanted was fame and to conquer every grandmotherly figure he set eyes on; at the exception of his loving Maria (the poor thing)!

Well, as it seems neither got their way as Caroline gave birth to a precious daughter which she was barely allowed to see- and George, after much ado, managed to lose Maria altogether.

I felt so much compassion for this kind princess and her overly loving ways with people. At the beginning I thought she was very odd, and frankly her issues with hygiene were a bit overwhelming…But after living through her story, I began to feel that there was so much more to this lady. Within that flamboyant self, there actually thrived a simple and pure soul. There was no malice in this lady who used humor to hide her sorrow.

I was particularly touched by the way she helped poor families and how she loved the children so. She built a school for disadvantaged children and opened up her home to all. It’s no wonder that everyone who got to know her on a more personal level also appreciated her goodness. People were able to accept her unusual ways in exchange for her company and friendship.

Although I found the book stalled a bit towards the middle, some of the outrageously funny scenes made up for the anticipation of wondering where all this would result.

I enjoyed reading about Caroline’s life- what a strange royal indeed! And George III is one character I’m not about to forget any time soon. His kindness towards Caroline (the only Royal who actually displayed some compassion) was a times very touching. He was very endearing and sincere in his concern about his family as well. Although he was portrayed as being some sort of an outcast for being unpredictable due to his bouts of mental illness, George was a vivid character who livened up much of the court scenes with his unusual ways and manner of speech.

Indiscretions of the Queen touches on very real basic human issues that are still important today: acceptance, image, deception and mental and emotional suffering…Much to ponder on, yet presented in a very light and uplifting read. Very enjoyable.
Posted by Lucy at 2:13 PM