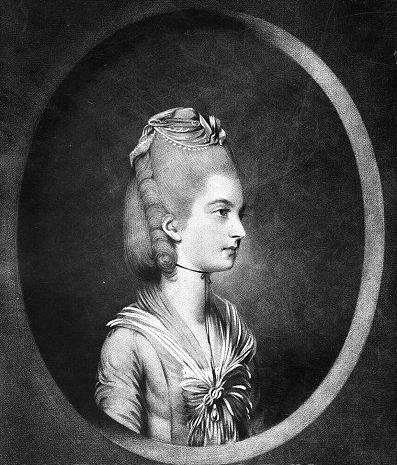 So here’s the story of another detrimental lady that takes almost center stage in Plaidy’s ‘Indiscretions of the Queen’. This detrimental was no other than the conniving Lady Jersey, born Frances Twysden (1753 – 1821).

If we stick to the saying that ‘the apple doesn’t fall...,’ I guess it would be no shock to learn that she was the daughter of a disreputable bishop- or that at the young age of seventeen she eagerly married Georges Villiers, 4th Earl of Jersey, who was twenty years her senior. And- that throughout her marriage, Lady Jersey kept herself quite busy flaunting and romancing with numerous members of the English aristocracy.

Her affair with the Prince of Wales began when she was almost thirty years-old, but she would only become Senior royal mistress some twelve years later (by then she was also a grandmother). In the meantime though, she opened her home as the meeting place for high society gambling and her salon was renowned for being the ‘in’ place for social rendez-vous; such a classy gal!

Lady Jersey was quite the schemer as well. She was personally responsible for encouraging the Prince of Wales to marry Caroline of Brunswick. Knowing very well that Caroline would never appeal to George, Lady Jersey was in fact securing her place at Court. She had even managed to lure George from his ‘supposed’ wife Maria Fitzherbert.

Lady Jersey kept her position and the right to run the Prince’s life as she pleased. Her sole purpose was retaining position as she destroyed everyone else’s. Her scheming was such that she even managed to win Queen Charlotte’s favour and trust (convincing the Queen that anyone was better than Caroline-gasp!)

Finally in 1803, she was replaced by a new grandmotherly figure in George IV’s life. But this did not limit Lady Jersey; she found great pleasure in pursuing her lurid diversions which continued even after the death of her husband. According to her, she had had a wonderful marriage producing ten children. Lady Jersey really did live a ‘fruitful’ (or should we say, detrimental) life.