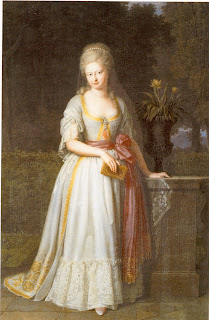 What a short tragic life this German princess led…Seems like the Brunswick sisters had the worse of luck when it came to marriage.

Augusta, Caroline of Brunswick's eldest sister ( often called ‘Zelmira’ by her family), is mentioned early on in ‘Indiscretions of the Queen’. Her upcoming marriage to Prince Frederick Wilhelm Karl of Würtenburg and the exciting notion of having a husband was a thrilling event. Caroline especially aspired to this and couldn’t wait to be the next one in line for marriage. Little did she know that her sister’s marriage would be doomed right from the start.

And, if you think Caroline had it bad- Augusta’s fairytale, (if one can even call it that) was a horrible nightmare. Prince charming turned out to be a brutal man who was repeatedly violent towards her. He made her life so unbearable that she escaped to find refuge within the realm of Empress Catherine II. To rid herself of the rogue, Augusta seeked help from the Empress because going to her family was useless. Her father could not understand her situation and refused her from getting a divorce.

The desolate Princess confined herself to the estates where she was placed in the custody of Wilhelm von Pohlman. Compare one brute to the other, this man was no different. Taking advantage of his position, he apparently forced himself upon her repeatedly- she soon became pregnant with his child.

Poor Augusta went into premature labor and suffered severe complications…The coward, for fear of letting out his secret of having fathered and illegitimate child, left her to die without providing her with medical care. She hemorrhaged to death. Her family was notified of her death and told that she died from a bursting blood vessel. The truth only came out later when her eldest son had the whole mystery investigated.

Here ends the tragic life of another ‘injured’ princess of Brunswick.