BOOK REVIEW: My Enemy the Queen, by Victoria Holt 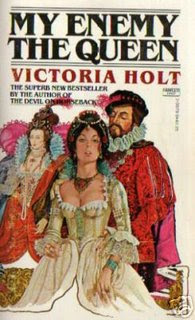 Here’s a story that webs the lives of Elizabeth I, Lettice Devereux (granddaughter of Mary Boleyn), the Earl of Leicester and finally the Earl of Essex (Lettice’s son)…

In reading this novel, it would seem that Elizabeth had few other interests besides the Earl himself firstly, other young gents, and finally, power. She was portrayed as being ruthless, self-centered, vain, quite nasty, frivolous, superficial and vehemently jealous and possessive. Gee what wonderful traits for a monarch.

Lettice, was actually not any better. This one was portrayed as scheming, devout of morals, sexually insatiable and having very few other interests at heart. Boy did this one need a hobby!

The Earl of Leicester was a man hungry for power, endowed with incredible chameleon prowess when it came to keeping himself latched onto the Queen. Oh, yes, and if one can get past his penchant for murder- I suppose you can call him quite gallant.

The Earl of Essex, being another bird of a feather, had noone else in mind but himself. Totally arrogant, unyielding, a womanizer and royal disturber- this Earl totally enraptured the Queen.

What can I say… absolutely irresistible characters! Talk about an entertaining read. I especially enjoy when Plaidy, oops, Victoria Holt, uses the first person. It’s carried superbly in this novel. There were times when I thought the story dragged a bit (I mean how many shallow details can you read about in just one paragraph?)

So what made this book so interesting for me? Basically, there wasn’t much to the story except the intricacies of the characters’ relationships towards eachother. In one way or another they were all linked like a magnet to the Queen. Despite the fact that I loathed her completely in this novel, in the end, Elizabeth still shone majestically.

Lettice only began to grow on me towards the end, where I finally sensed she could actually care for someone other than herself. Before that I couldn’t quite understand her love-hate need for the Queen.

The Earls were quite secondary in this novel. Their representation only strengthened their humiliating choices to serve and revel in foreplay to an end they could never attain. The ultimate prize for all those concerned : Queen Elizabeth; magnificently unattainable to all.